A Must-Have for every Toastmasters Club.  Red, Yellow, and Green lights in a Solid Wood Box, with Automatic Timing Contols.  Follow the instructions to build one for yourself.

So who is this person who spends his time coming up with an Automatic Timing Light, and providing the Instructions so others can do it too?

My name is John Miller, and I live with my wife and four children in Eden Prarie, MN.  I work as a controls engineer in the data center cooling industry.  I have a bachelor’s degree in mechanical engineering, and a masters in electrical engineering, both from the University of Minnesota.  Previously, I worked as a controls engineer at a refinery in Oklahoma, and prior to that, I worked in pressure transmitter diagnostics technology, where I was inventor on 32 patents. 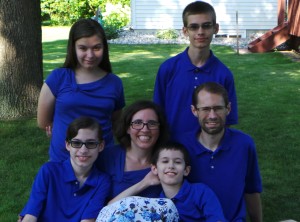 I have been a member of Toastmasters clubs in both Minnesota and Oklahoma.  I have earned my Advanced Communicator Silver (ALS) and Advanced Leader Bronze (ALB).

I enjoy bicycling, wood-working, electronics, and computers as a hobbies.  The latter three were the basis for my deciding to build the Automatic Timing Light.

I have always been fascinated with microcontrollers.  Perhaps my favorite assignment from back in college was my senior Robot Design Project where we used the BASIC Stamp microcontroller to make a device that did very simple motion.   Ever since that time I have been wanting to do the next bigger or greater thing with a microcontroller.  At one point I paid almost $200 for a BASIC Stamp 2p40 with the prototype board.  Little did I know that 15 years later I would be able to purchase a much more versatile and powerful Arduino Uno for less than $5.

So why am I going to all this work?  Am I expecting to go IPO and become a tech billionaire?  No.  There is obviously not the same market for an Automatic Timing Light, as there is for Smart Phones, Internet Search, and Social Media.  I am doing this because I enjoy it.  I believe that every Toastmasters club could benefit from having an Automatic Timing Light, and want to enable clubs to get one as easily and as least expensive as possible.  It brings me satisfaction if something that I create can be used and appreciated by others.

So take a look at this website, and the instructions/plans for building the Automatic Timing Light.  Pass the word along to any of your friends or colleagues who might be interested in this.